Lumineth Realm-lords: Sevireth, Lord of the Seventh Wind (Hurakan Spirit of the Wind)

Of all the seven sentient winds of Hysh, none have suffered so greatly at the hands of Chaos as Sevireth. Manifesting in physical form to defend the Ten Paradises, the spirit also known as the Red Gale seeks to tear down the monuments of its foes with scouring magical sandstorms, all the while plunging arrow after enchanted arrow into the black hearts of the realm’s invaders.

As fast as the searing winds that race across the deserts of Hysh, Sevireth soars around the battlefield picking off key opponents with Enathrai, his giant magical bow. The scorching desert squalls that billow in his wake are capable of stripping flesh from bone, and scouring the magical essence out of the profane monuments of his foes.

The kit is comprised of 26 plastic components, with which you can assemble one Sevireth, Lord of the Seventh Wind, and is supplied with 1x Citadel 60mm Round Base.

This model can alternatively be assembled as a Hurakan Spirit of the Wind.

Enraged as they were forced to watch the Ten Paradises become corrupted by the presence of Chaos, the sentient winds of Hysh were given focus by the Lumineth and resolved to fight in defence of their home. With arcane arrows and storms of rocky shards they swirl across the battlefield and bring whirling death to the agents of disorder.

Lightning fast, and armed with a mighty Bow of the Wind’s Vengeance, the Hurakan Spirits of the Wind are almost impossible to catch and shoot with unerring accuracy on the move. The combination of speed and power makes them a perfect choice for countering the enemy’s strongest models, be they elite infantry or legendary heroes. 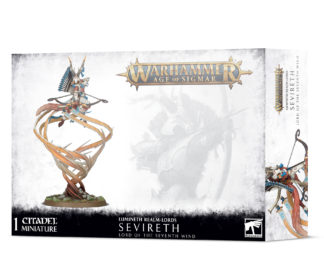 You're viewing: Lumineth Realm-lords: Sevireth, Lord of the Seventh Wind (Hurakan Spirit of the Wind) 40.50 €
Add to cart