Lyrior Uthralle, Warden of Ymetrica, voice of the Lord Phoenix, is no normal lord of the Vanari. Speaking with the authority of Tyrion himself, the Lord Regent Supreme is a peerless commander and figurehead for all of the Tyrionic nations of Hysh. Renowned for his logical and cool-headed attitude in battle, in truth Lyrior is an aelf possessed of an all-consuming grief for the loss of his family to a Flesh-eater invasion, for which he blames himself alone.

Mounted upon Farael, his nimble lightcourser steed, the Warden of Ymetrica darts across the battlefield spearing foes and hurling beams of searing light with his lance, Daemonbane. He is also a commander of unsurpassed skill among the Lumineth, making him a perfect choice to lead your forces into battle.

The kit is comprised of 42 plastic components, with which you can assemble one Lyrior Uthralle, Warden of Ymetrica, and is supplied with 1x Citadel 90mm x 52.5mm Oval Base.

This model can alternatively be assembled as a Vanari Lord Regent.

Representatives of Tyrion’s will among the Vanari warhosts, Lord Regents speak with an authority unmatched among their militant kin. Bedecked with dazzlingly pure aetherquartz and displaying feats of surpassing martial skill, these august warriors inspire their comrades through both word and deed.

Fast and durable, Lord Regents are powerful supporting heroes for Lumineth armies, particularly those containing Vanari troops. While perfectly comfortable dazzling enemy troops in the heat of battle, they also empower their nearby allies, making them a valuable centrepiece for your warhost. 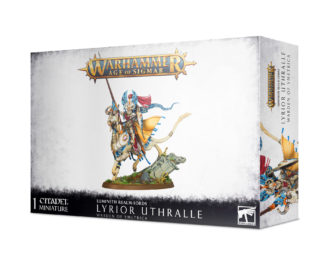