In Morat military practice, engineers are soldiers specially trained to give immediate support to infantry operations, clearing obstacles and working in the front lines of combat. They can also repair machinery and damaged equipment, but a Morat engineer is still born to blow things up. The Kurgat are the truest exemplars of Morat assault engineering. They are a combat regiment, experts in strike techniques, whose mission is to assault and destroy fortified positions. They cover the advance of the rest of the Morat units, blowing up impeding structures and repulsing counter-attacks launched by the enemy. They are made up of true combatants, gifted with the sharp military attitude of warriors that embody the spearhead of their army. The brutality of their fast and devastating attacks is the key to their success. The Kurgat enter the battlefield carrying explosives, gear and the biggest guns available. They are easily identified by their appearance. They all sport scars telling the story of dangerous, direct combat situations, involving enemy fire and the continued blasting used to blow up their targets. The Kurgat firmly believe their scars have to be worn with pride as they are the medals of these storm troops. The scars are intimidating, telling an enemy that their bearer has confronted death and escaped victorious. Because of these characteristics, the regiment has a long tradition of hardness, having to take part in and win lots of Sotaraks. According to their unofficial motto, the Kurgat are always easy to find: they are on the section of the frontline with the most explosions, fire and smoke. 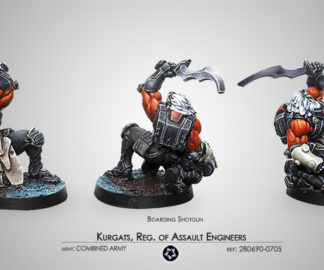