The Death Guard are the chosen instruments of Nurgle, Chaos God of despair and decay, and one of the nine Traitor Legions that betrayed the Emperor during the Horus Heresy. Formerly known as the Dusk Raiders, the XIV Legion were rechristened the Death Guard when they were united with their Primarch Mortarion during the Great Crusade.

The Death Guard takes great pride in their resistance to poisons, disease, and mortality in general. Even prior to their fall into treachery the Death Guard were famous for their resilience and attrition warfare tactics. This resilience was further augmented by the touch of Nurgle that frees them from the burden of pain, their nerve endings long since rotted away.

The Death Guard march to war accompanied by various other minions of Nurgle. Droning daemon engines skim ahead of the main Death Guard advance while mobile artillery tanks crawl along behind. Infected civilians, touched by Nurgle’s gifts shamble towards the enemy lines as daemons manifest from the pools of effluent left in their wake. At the head of the foul menagerie, borne aloft on tattered wings, is Nurgle’s angel, the fallen daemon Primarch Mortarion.

With the breaching of the Cadian Gate and the occurrence of the great rift, the Death Guard march forth from the Plague Planet once more, treading upon Imperial soil despoiling the ground and spreading Nurgle’s bountiful gifts to an ungrateful Imperium. 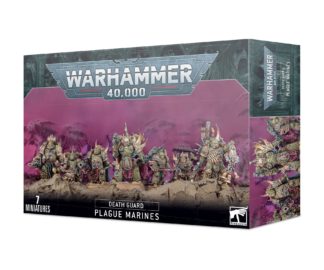