Zoe Nemova and her Remote, ‘П-Well’, reporting for duty for the first time before their commanding officer.

Zoe Nemova has worked her fingers to the bone to become one of the foremost members of the Clockmakers Team. The daughter of an influential executive of the Bank of Tunguska, she has been afflicted by an obscure degenerative disease, a mutation of an old American military virus, since she was eight. In order to pay for the costly biomedical therapy available only in Praxis, Lev Nemov, Zoe’s father, embarked in high-risk/high-yield financial instruments, siphoning funds from the Bank and selling financial information about the Khruleff family to benefit the Geigers. Zoe’s treatment succeeded in keeping her alive, but by the age of sixteen she had had sixty percent of her body replaced by wetware and biosynthetic organs. Just when things seemed to be looking up for her, sudden market fluctuations wrecked havoc on Nemov’s high-risk undertakings and the Khruleff pinpointed the source of the leak. Nemov fell into disgrace and was allegedly abducted by the Khruleffs, never to be seen again. Their appetite for vengeance not yet sated, the Khruleffs posted a bounty on Zoe and her mother, but Nemov’s former dealings with the Geiger family included a clause that both women would be cared for and protected for five years. Under a false identity, Zoe pursued a higher education in engineering and cybernetics, and learned from her bodyguards how to operate a gun and how to live on the run. When the five-year period expired, the Geigers withdrew their protection and Zoe and her mother became fugitives with no capital but their skills, their swiftness and their wits.

The following years were a blur of jumping from city to spaceport, from orbital to lunar colony, never spending more than a few months in any given place, trying to stay just one step ahead of the Khruleff hired guns. During this period, Zoe applied her full intellect to her work as a repair technician and her studies, in a race to gain an edge over her pursuers and her illness. After much toil, her undeniable talent earned her a position in the distinguished Praxis ArTechnodivarius group, the elite of cyberengineers. With them, she was able to learn—and develop—some of the most esoteric and cutting-edge procedures and technologies of the time, a passion that spurred the creation of her inseparable companion, the Remote known as П-Well. But the Khruleff hounds picked up her tracks again, and once more she had to flee with her mother. Zoe resurfaced again years later due to her involvement in the C-7 incident, during which her mother passed away and she suffered severe physical trauma that led to even further cybernetic augmentation.

As a sign of gratitude for her role in the C-7 incident, the Nomad Military Force intervened to cancel the Khruleff bounty. The military also welcomed Zoe into the Clockmakers Team, where she had built a solid reputation as an ace field engineer and repairperson, but also as ‘quite a handful’. Independent-minded and rebellious, Zoe is difficult, brilliant, fickle and, at times, unendurable. Rumor has it that the Team tolerates her for her talent only, and she certainly exhibits the bluntness and blindness to social cues stereotypical of engineers. From her stint as a runaway, and perhaps her natural disposition, she tends to keep to herself. She speaks sparsely, walks softly and, although she rarely raises her voice, she has never lost an argument. Zoe’s physical features are in constant flux as she experiments with modular implants and augmentations to stave off the disease eating away at her body. Like many fugitives and despite her noteworthy appearance, she has a knack for blending in, for merging with a crowd, a talent that can come in handy on the field and one that she might need to employ again: the Khruleffs have a reputation for never leaving a job half done, and Zoe herself has no intention of leaving her parents unavenged.

П-Well is Zoe’s faithful companion, a remote built from scrap and black-market stock parts. Its micromind contains an AI that would be blatantly illegal out of the Nomad jurisdiction. П-Well is the perfect associate for Zoe: more dependable and uncomplicated than any human. It stores all tools Zoe might need on the field and has her back while she toils away. It has become indispensable to Zoe, to the point that the psych profiles of both show growing irritability spikes whenever they spend some time separated… 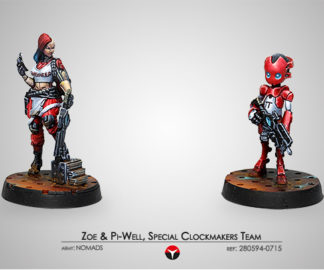