DEVOUR EVERYTHING IN YOUR PATH

Take control of a giant monster and its horde of minions and fight for control of your turf. Stomp the competition to dust as you slam, smash, blast, and brawl your way to victory in the biggest battle ever to hit your table in this all-new edition of the world’s best game of giant monster combat!

The horrors from space called the Planet Eaters are towering beasts of impenetrable flesh and glistening metal. Driven by the need to feed, they consume all who are foolish enough to stand against them. Gorghadra, a gigantic beast of armored plating and muscle, leads this ravenous horde. Parasites the size of small houses swarm in Gorghadra’s shadow, feasting upon the scraps that fall from the monster’s fanged maw. 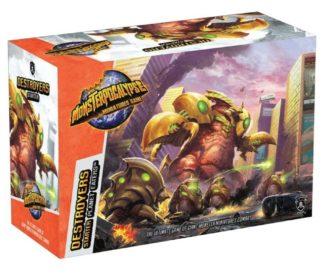