Deep in the city of Excelsis lie several wards sealed off on pain of death, areas forever blighted by Tzeentchian sorceries left in the wake of the traitor Ortam Vermyre’s uprising. To deal with the magical creatures and haphazard spells that found their way out of these quarantined zones, the Order of Azyr was formed, with veteran witch hunter Galen ven Denst at its head. Together with his daughter Doralia, a peerless markswoman who’s perfected the art of banishing rogue daemons with her rune-engraved crossbow bolts, he dedicates his life to snuffing out all manner of arcane threats to Excelsis.

The unique fighting styles of this father-daughter combo come to the fore when they deploy on the battlefield, with Galen plunging into furious close combat while Doralia picks off her targets at range. Both possess weapons ideally suited to hunting arcane foes, and they’re capable of dissipating magical energies and rendering the greatest of endless spells harmless.

The kit is comprised of 18 plastic components, with which you can assemble one Galen ven Denst and one Doralia ven Denst. Galen can be assembled with a choice of weapon arms holding a pistol and torch, or a sword and pistol. Doralia can be assembled either with or without her tall, wide-brimmed witch hunter’s hat. These models are supplied with 2x Citadel 28mm Round Base. 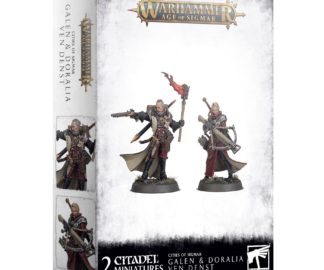 You're viewing: Cities of Sigmar: Galen and Doralia ven Denst 34.00 €
Add to cart