When the Daughters of Khaine march to war, their wizards and priestesses can conjure blood and shadow into dangerous magicks to harry their foes.

The Bloodwrack Viper is an enormous serpent formed from boiling blood, a manifestation of hatred and bitterness that binds its prey into a crushing embrace before squeezing so forcefully that the victim explodes in a shower of gore.

Carried through the air by a tempest of blood, the Bladewind carves a bloody path through anything in its way, slicing through armour with unnatural ease to get to the flesh and blood beneath.

The most devout of Khaine’s priestesses can summon a manifestation of his Iron Heart, a blood-dripping icon that burns with supernatural rage. Those bathed in its wrathful aura continue to fight and kill even when stricken with mortal wounds.

The Daughters of Khaine endless spells offer diverse and powerful tactical options to your army, designed to slay your foes and offer helpful boons to your own units. This set contains models for all two endless spells and an Invocation of Khaine, two of which can be cast by your wizards, while the third can be summoned by priestesses.

Warscrolls for these models can be found in Battletome: Daughters of Khaine. 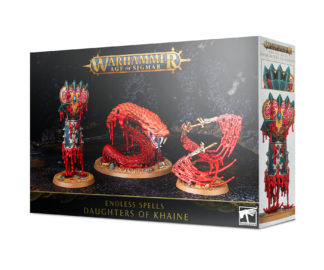 You're viewing: Endless Spells: Daughters of Khaine 25.50 €
Add to cart