Greatest of the ancient race of Ents, Treebeard is immensely old and has potentially roamed the forests of Middle-earth from the dawn of the world. Since the loss of the Entwives, Treebeard has cared little for the goings-on of those outside Fangorn Forest, instead concerning himself with shepherding those under his care. Should a threat come to Fangorn, Treebeard will undoubtedly unleash his wrath against it.

Meriadoc Brandybuck, a Hobbit often just called Merry, is a known troublemaker and practical joker. More than once he has been responsible for setting off Gandalf’s fireworks, much to the annoyance of the Grey Wizard. However, Merry is ready to help Frodo in his quest and sets out from the Shire into a life of adventure and discovery that will change him forever.

Peregrin Took, or Pippin to those who know him, is a carefree Hobbit who is content with his life of mischief alongside his best friend, Merry. But when Pippin volunteers to be part of the Fellowship of The Ring, he has little idea of the perils that lie ahead – and the fact that he will have to leave second breakfast behind in The Shire.

Treebeard is a natural leader of the Fangorn army list, both in terms of the narrative of Middle-earth and his near-unstoppable power on the battlefield. He can bear Merry and Pippin to battle, as he did while leading the Last March of the Ents, and the kit includes the option to include both Hobbits atop his shoulder branches. Merry and Pippin also feature in the set as models on foot in their own right – in fact, they’re a little taller than normal, as they’ve recently imbibed Ent-draught, which has given them an enchanted growth spurt!

This kit comprises 63 plastic components with which you can assemble 1x Treebeard (who can be assembled with or without ‘mounted’ versions of Merry and Pippin), 1x Meriadoc Brandybuck on foot, and 1x Peregrin Took on foot. It comes supplied with 1x Citadel 60mm Round Base and 2x Citadel 25mm Round Bases. 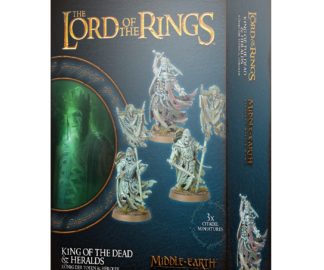