Distant relatives to the troggoths found in caves and mountains, Marshcrawla Sloggoths are slow, patient hunters with long, grasping limbs that they use to grab unsuspecting victims from the burrows and beds they sleep in. The grots in Kruleboy society ride these shambling beasts into battle, strapping howdahs to their backs and harrying enemies with snatcha-stikks and catcha nets.

Though primarily concerned with capturing beasts and bodies for the amusement of the Kruleboyz, the crew on a Marshcrawla Sloggoth also hammers out a rhythm that mimics the hooves of Kragnos, the End of Empires and living god of Destruction, beating across the Mortal Realms, driving the orruks and their allies into a frenzy. Rarely a mainstay of the front lines, the grot crews instead steer the Sloggoths to pick off vulnerable individuals, whilst ensuring the surrounding Waaagh! is sufficiently buoyed by the beat of their drums.

This 43 piece plastic kit lets you build one Marshcrawla Sloggoth, complete with a howdah crewed by cruel and mischievous grots. There are a number of build options available, including two heads for the Sloggoth and a choice of catchin’ nets and snatchin’ stikks for two of the crew – perfect if you fancy running multiple versions of these loathsome beasts. The kit also comes with one 105mm x 70mm Oval Citadel base. This miniature is supplied unpainted and requires assembly – we recommend using Citadel Plastic Glue and Citadel paints. 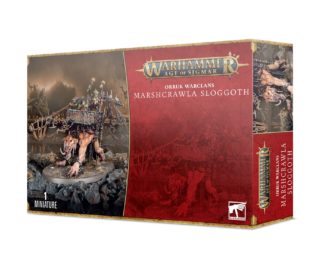