When the cannons of the Gladiator Reaper spin to full pitch, the droning makes the teeth of all nearby itch with the intensity of vibrations. Within seconds, thousands of spent casing pour over the battle tank’s armoured hide as enemies are erased from existence by the storm of fire.

Like the Predator is to a Rhino, the design of the Gladiator is based upon that of an Impulsor’s chassis, and has been designed to serve as a front line battle tank rather than a transport vehicle. If you’re looking to shore up your batteline while offering some formidable fire support, a Gladiator will fit the role perfectly! With its twin heavy onslaught gatling cannon and two tempest bolters, the Reaper-pattern Gladiator is the final say in infantry-shredding firepower, making it the perfect choice for facing down enemy hordes.

This set is supplied in 157 plastic components and also contains 1x Citadel 100mm Round Base and 1x Clear Tank Hover Stand. A Primaris Vehicle Transfer Sheet is also included. This kit can alternatively be used to assemble a Gladiator Valiant, Gladiator Lancer or an Impulsor. 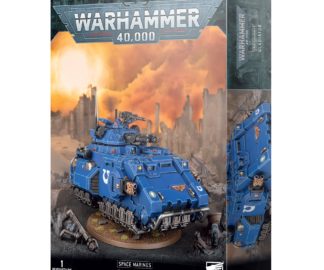