Having surrendered to the terrible curse that the Canis Helix afflicts, the Wulfen are a grotesque distortion of the power of the Space Wolves. Loping forward at a preternatural pace, due to the strange curse that alters their anatomies in bizarre and striking ways, they are perfectly adapted to the hunt, chasing down and attacking the foe with a constant, barely controlled berserker rage. They carry potent artefacts; attacking with claws, axes and hammers as stormfrag launchers, controlled by wilful machine spirits, hurl explosive charges into the fray – and those who hear their howling war cry can feel their own heart within begin to stir…

This multi-part plastic kit contains all the components necessary to assemble five Wulfen. These savage beasts can be built with a thunderhammer and storm shield, great frost axe or a pair of frost claws – their backpacks can optionally feature either a grisly trophy rack full of bones or a stormfrag auto launcher. One Wulfen can be assembled as a Pack Leader in a unique pose, with special frost claws, and the box includes numerous decorative pieces to give your Wulfen a unique look.

This boxed set contains a total of 165 components, and includes five Citadel 40mm Round bases. 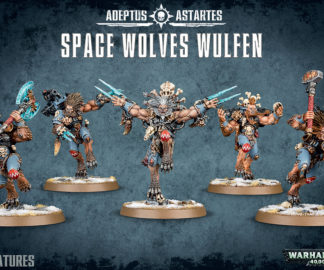