Many things are said about the consulting firm Fukurō Security, that it’s actually a front for the Fukurō ninja clan. It is said that this alleged ninja clan has been dedicated to providing espionage and assassination services for centuries, and that they have simply adapted to the times. It is also said that the Fukurō clan is beyond mysticism and honor, that it is willing to use any innovation and technological trick available, and that its Shikami agents are proof of this. If the Shikami are the destructive demons of traditional Japanese folklore, these technological ninjas are not far behind. With their enhanced light armor and superb martial arts skills, they are capable of incredible feats. Nimble and quick, they defy gravity and bullets seem incapable of reaching them; they are like a destructive speck that does not leave a trace except for a row of dead bodies. But if the Shikami handle the dirty work that corporations, Yǎnjīng, or the JSA High Command give the Fukurō clan it’s not because of these skills, but rather because of something that no Sphere Intelligence specialist wants to admit: if there is any way to take out a target, regardless of who it is or how protected it may be, a Shikami will always find a way. That is what urban legends say, and  they never fail. 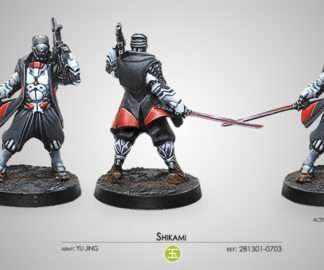