“Vis Crucis. Dei Gratia” (The Power of the Cross. By God’s Grace) Motto present on the Crusader Brethren’ insignia.

Crusader Brethren, “the Cross Bearers”, are a special immediate deployment unit serving the Panoceanian Military Orders. Given the danger level of the operations they execute, the redeeming value of service with the Brotherhood of Crusaders, in respect of a Resurrection bulla, is double that of one for a regular Sergeant of Arms. Members of this unit specialize in airborne, orbital and space actions, and they are selected from among the most dedicated and capable of Order Sergeants. Their mission: to bear the Cross, symbol of Christ, and stab it into the heart of the enemy. Crusader Brethren carry heavy armor and protective gear as they know they will always be deployed into the middle of the most intense firefights. Every time a force of the Military Orders is halted on the battlefield due to enemy fire, caught in a situation where they can’t advance and crush the enemy, then they launch the Crusader Brethren. They streak across the vacuum of space or several kilometers of atmosphere, falling like meteorites onto their objectives. What they do to win when they engage the enemy in combat stays between them and God himself, but if you ask, you will discover the notion of stabbing the Cross into an enemy’s heart is an absolutely literal description. 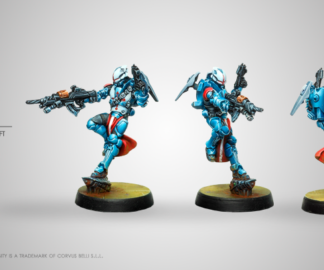