Harnessing the energies of forge worlds within their curious weaponry, the Rangers of the Skitarii are implacable and relentless hunter-killers. For them, an engagement is not over until their enemy is destroyed – even if this means stalking them across galaxies and over decades.

Skitarii Rangers, featuring cowls and gasmasks, stalk their prey with galvanic rifles. Each trooper is sealed in heavy, industrialised Skitarii warplate, emblazoned with the symbol of the Adeptus Mechanicus, bristling with data-collecting sensors, antennae and environmental monitors. Mindful of the harsh terrain of Mars, their legs have been removed from the knees down, with bionic replacements lending each model an air of cold, cybernetic augmentation

The unit can include an Alpha, armed with either a radium or arc pistol and a close combat weapon (either a power sword, taser goad or arc maul) and three models can carry special weapons – available to you are a transuranic arquebus, an arc rifle and a plasma caliver, the last of which includes a specific head and backpack. One model can be made into an Alpha, fitted with an enhanced data-tether or an omnispex – the box truly portrays the compulsive data-gathering nature of the Adeptus Mechanicus.

This multi-part plastic kit contains everything needed to make either ten Skitarii Rangers or ten Skitarii Vanguard. Included in the box are 124 components – twenty-three heads, eleven of which are Skitarii Rangers, twenty-five weapons, a small transfer sheet one Citadel 60×35.5mm Oval Base and ten Citadel 25mm Round Bases. 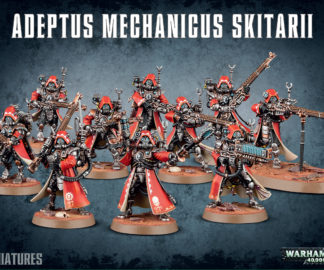