Chaos corrupts all, but it does not go unopposed. The forces of Order fight to reclaim what’s been taken, including the Allpoints, as the lands of the Varanspire were once known. Small forces are even now testing the defences of their infernal foes, infiltrating those blasted lands through stealth and guile. Every champion of the Ruinous Powers slain is a victory to be celebrated, every ancient relic liberated a gift for civilisation. Now it’s up to you – resist and reclaim!

Sentinels of Order is the essential guide to commanding the forces of Grand Alliance: Order in games of Warcry. 12 warbands are detailed in full, from the noble Chambers of the Stormcast Eternals to mysterious aelves and sturdy duardin. You’ll find loads of new fighter cards, background tables, Fated Quests, and Challenge Battles – in short, everything you need to play the forces of Order in full campaigns.

– Full rules for the following warbands: Cities of Sigmar, Daughters of Khaine, Idonenth Deepkin, Khainite Shadowstalkers, Kharadron Overlords, Lumineth Realm-lords, Fyreslayers, Seraphon, Sylvaneth, Stormcast Eternals Sacrosanct Chamber, Stormcast Eternals Warrior Chamber, and Stormcast Eternals Vanguard Auxiliary Chamber.
– Fighter cards for nearly every model available to the Grand Alliance: Order ranges.
– Rules for two Monsters of Order: War Hydra and Kharibdyss.
– Refined rules to include Monsters in your warband, as well as new abilities to use against them!
– New rules for warbands with mixed Faction Runemarks under the same Grand Alliance and more than one Leader.
– Tables for warrior names, warband origins, and leader backgrounds.
– 4 Order Fated Quests, including Spoils of Victory tables for both Honour and Glory.
– 6 Order Challenge Battles, including special rules and valuable Spoils.
– Blank roster sheets to copy and fill.

If you yearn to take the fight to the eternal enemy of Order, this 112-page softback book is for you. 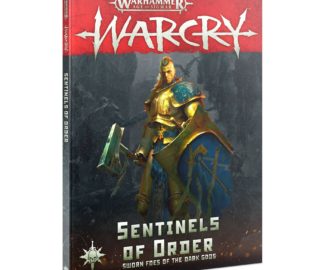