Warrior Chambers are made up of many different retinues that specialise in varying aspects of war. In battle, however, it is common to find all these Stormcasts fighting as one. Disciplined Liberators and Judicators of the Redeemer Conclaves form the heart of the battle line, while swift Prosecutors from the Angelos Conclaves hunt down those enemies who attempt to flee. Mightiest are the veteran champions of the Paladin Conclaves, whose powerful weaponry and breathtaking skill sees them and their brethren survive even in the cursed lands of the Eightpoints.

Bring the might of the Warrior Chambers to your battles with this card pack! With this set, you’ll be able to bring some of Sigmar’s most stalwart warriors to your games of Warcry, with fighter rules for a vast range of different units. What’s more, an ability card lets you harness the storm-forged wrath of these warriors with a range of bespoke tactics and tricks.

This set contains:
– A faction ability card, allowing you to harness tactics, tricks and abilities unique to this warband, including the runemarks you need to use them. The reverse allows you to identify the fighters in your warband. The set contains a faction abilities card in each of the following languages: English, French, German, Italian, Spanish, Chinese, Japanese, and Russian.
– Fighter cards for 30 types of fighter, including Liberators, Prosecutors, Judicators and Paladins
– 2x divider cards, used to keep track of any tokens that apply to fighters in games 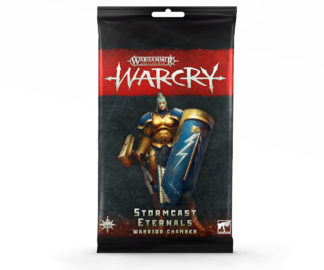