The Military Orders have small, select regiments of light infantry to support the actions of their knights in combat. In crusading times, these reduced units are filled with experienced PanOceanian volunteers, attracted to action, faith and glory. Their organizational structure is the same as any other military unit, with the proviso that command of the detachment is always held by a Father-Officer of the Order. The regiments of Brother Sergeants form a core of experienced veterans who, as men at arms expert in various military specialties, reinforce the Order’s line troops. In the operative organization chart, Specialist Sergeants carry out tactical support, or advanced force functions, as required by the specifications of a mission. It is quite a sight to see Sergeants on a transport heading straight for battle. While the more fervent believers chant prayers, the more mundane listen to psychomusic through their skull implants. All are harnessed to their padded acceleration seats, sharpening their bayonets and turning the cargo hold into a forest of sharp and shining blades. In those moments prior to the clamour of battle, Sergeants smile with pious joy to encourage the rookies and hide their eagerness to fight and kill as soon as they jump off the vehicle. 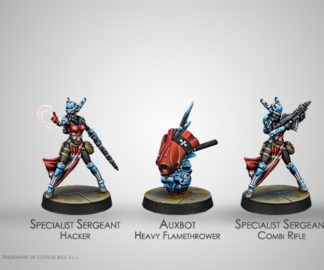