In stock (can be backordered)

Warning: the content of the Necromunda: Underhive box is in English. However, the box also includes a booklet of 36 pages completely translated into Spanish, which covers everything you need to play.

Deep below the nightmarish, polluted hive cities of Necromunda, in the twisted, dark tunnels of the Underhives, rival gangs fight to the bitter end for personal power, survival and the honour of their Houses.

Designed for 2 players, this is a game of tactics, skill and absolute ruthlessness, set on the iconic hive world of Necromunda. Players choose 1 of the 2 included gangs in the box, and fight brutal skirmishes on the game board using everything at their disposal – ducking behind barricades to survive withering hails of gunfire before popping up and shooting back, placing and overriding traps, using the decrepit, crumbling corridors of the Underhives to unleash precise strikes before scurrying back into the dark. Survival in the Underhives is a difficult and desperate business, where violence is often the only option.

Necromunda: Underhive comes with a 104-page softback book containing all the background and rules needed to immerse yourself in the bleak industrial hellscape of Necromunda. It contains an introduction to the Imperium of Man, the role of the Hive worlds within that Imperium and descriptions of a typical Hive structure, along with in-depth explanations of the history of Necromunda, its main cities and the shady characters who populate them. Detailed descriptions of the battles that occur daily in the Underhives, and the bounty that these battles are fought over, provide the inspiration for your games.

Also contained in the book are all the rules you need to play, from the basic mechanics of line-of-sight, movement and combat to advanced rules such as moving a group of models together as a team, interfering with close combat, injuries, tactics cards and even running away! The basic rules include their own scenario, designed to ease newcomers into the game – this uses its own special game tile, which is printed on the inside of the box.

There is a complete Underhive Armoury – this is a list of the weapons you’ll find included with the miniatures in the box, with complete rules for using each in games. Included are ranged weapons, close combat weapons, wargear and grenades. There is a guide to creating your own House Escher or House Goliath gang – this contains a full breakdown of the types of gangers available, and the weapons, wargear and armour each can use. There are even suggestions for names – the denizens of the Underhives need to be titled appropriately…

6 scenarios are included in the book, each of which shows you how to configure the game tiles, how to set up the combatants, the special rules that the scenario requires and the victory conditions.

A major part of Necromunda: Underhive is the included tactics cards. These add a certain anarchy to your games – after all, there are few real rules in gang warfare – and represent the different schemes and tricks employed by Houses Escher and Goliath. They are separated into 3 distinct categories: Gang Tactics, which are 20 cards usable by any House; Escher Tactics, 4 cards usable only by House Escher gangs and Goliath Tactics, 4 cards usable only by House Goliath gangs.

As well as these, there are 42 Profile cards: 10 of these feature named House Escher fighters, with their statistics and capabilities listed for reference in-game, and a further 10 do the same for House Goliath. There are 22 blank Profile cards, which you can use to create your own fighters and build your very own Necromunda: Underhive gang.

The gangers that fight in the name of House Goliath are hulking brutes, each a pillar of muscle and pent-up violence ready to be unleashed. Far larger and stronger than an ordinary human, they flaunt their strength wherever they go and it is difficult to ignore the air of brutality which Goliaths wear like a mantle.

Assemble your Goliath gang with the following included components:

– 10 bodies – 2 each of 5 unique designs – each wearing furnace plate armour. These have been designed with specific weapon options in mind, though of course you are free to model them as you see fit;
– 20 heads – 2 each of 10 unique designs – 4 featuring respirator masks. There are 10 mohawks, which can fit onto whichever head you choose;
– 10 chest plates, in 5 unique designs, with shoulder pads and leg plates for each miniature;
– Weapons! There are quite a lot of these: 2 brute cleavers, 2 spud-jackers, 4 stub cannon, 2 combat shotguns, 2 ‘Renderizer’ serrated axes, 2 automatic grenade launchers, 2 power hammers, 2 plasma combi-stubbers, 2 ‘Krumper’ rivet cannon and 2 stub guns are included, along with additional frag and krak grenades, 2 sheathed knives and 4 sets of stim stashes.

House Escher is unique among the great Houses of Necromunda, for its gangs are made up entirely of women. Masters of pharmaceuticals and chemical manipulation, what an Escher may lack in terms of raw physical strength, she more than makes up for in speed, skill and sheer psychotic flair.

Assemble your House Escher gang with the following included components:

– 10 bodies – 2 each of 5 unique designs – each wearing flak armour. These have been designed with specific weapon options in mind, though of course you are free to model them as you see fit;
– 18 heads – 2 each of 9 unique designs – 4 featuring respirator masks. There are 14 different hairpieces – 2 each of 7 different designs – which can fit onto whichever head you choose;
– A huge selection of weaponry: 6 lasguns, 8 laspistols, 6 stiletto blades, 2 shotguns, 4 power swords, 2 autopistols, 2 shock whips, 2 needler/bolters, 2 plasma pistols, 2 chem-throwers and 2 autoguns, along with additional frag, krak and choke gas grenades, 4 sheathed stiletto blades and 2 sets of chem-synth packs.

Included are 25 round plastic bases – 15 x 25mm and 10 x 32mm – which feature sculpted details matching the aesthetic of the game tiles.

On top of this are the components you use to build the Underhive environment for playing games and scenarios:

– 9 unique, double-sided tiles, which are placed together in myriad configurations to represent the dark corridors and tunnels gangs skirmish within. The detailed boards feature walls, caved-in sections, missing floors and toxic spills;
– A frame containing 9 barricades, 5 loot crates (which can be modelled with or without a lid, allowing you to see the prizes within), 2 frag traps, 1 melta trap, 1 gas trap, 5 free-standing command terminals, 1 free standing reliquary, 1 beast’s lair (represented as a manhole cover with a sinister mutant’s tentacle bursting forth) and 1 priority token;
– A frame containing 7 heavy bulkhead doors to use in games, with optional handles for 2;
– A set of card tokens, including 5 ducts, 3 melta traps, 2 arc of fire templates (1 for 25mm bases, 1 for 32mm bases), 24 ready/pinned tokens, 16 fire/out of ammo tokens and 16 single wound/two wound tokens.

And, finally, the dice and templates you need to play:

– 16 six-sided 16mm dice in yellow and black: 6 standard dice with a Necromunda icon in place of the 1; 6 injury dice; 2 scatter dice and 2 ammo dice.
– 2 blast templates and a flame template, in clear orange plastic;
– A 12 clear plastic range ruler. 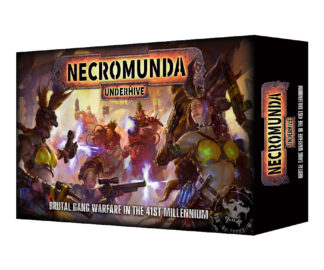