During D-Day on the beaches of Normandy, under intense machinegun fire, a general insisted the 5th Rangers open a route. At that moment the Ranger’s motto was born and few could guess the warrior tradition of that unit would resurge two centuries later on another planet.

This happened during the so called War of the Winter Sun. An Antipode chief named White Claw had grouped several tribes under the banner of a whitened sun and began an aggressive campaign of attacks and incursions into the eastern frontier regions of USAriadna. The momentum of the attacks took them further into USAriadnan territory each time, destroying important locations, and causing many civilian casualties. The USAriadnan military forces, unable to keep up with the frantic pace of the attacks and always a step behind the invading Antipodes, affected a change of strategy. The High Command decided to execute a surprise attack, a bold action of deep incursion to kill White Claw and behead the movement.

It should have been an in-and-out operation, with the forcefulness of an invasion and the speed of an infiltration. Heavy resistance was expected, so a light force could not be relied on to sustain the intense actions of the Antipode response. It was necessary to create a new, different, and specially formed unit to accomplish the mission. It had to be a well-equipped force, able to progress across the Antipode’s difficult terrain with overwhelming firepower. Volunteers where called from all USARF corps and submitted to intense jungle and forest combat training at camp Tigerland. This newly formed Ranger unit was to specialize in stealthy movement across densely wooded terrain in order to accomplish the mission objectives.

Issued with reinforced gear and assault armaments, the 5307th Rangers penetrated deep into Antipode territory directly towards the heart of the Winter Sun movement. Even today it seems incredible that they managed to cross such a stretch of terrain while avoiding Antipode patrols. However, in the end they were found out, and massacred the Antipode forces which threw themselves against them in an attempt to stop their advance towards the main camp. Harassed by the enemy and a progressive lack of supplies and munitions, the Marauders suffered many casualties, but never backed down. Even when all seemed lost, and to the amazement of the Antipodes, the Marauders thrust themselves upon the war party led personally by White Claw and killed him along with the remaining Antipode leaders. That was the end of the Winter Sun movement and the beginning of Marauders’ legend. Since then they have become one of the most reliable units in the USARF, always ready, and bringing honor to their legacy as Rangers, always leading the way. 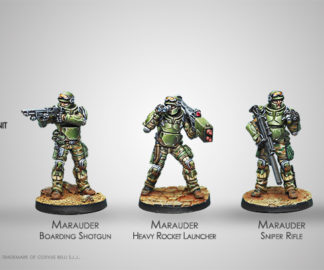