The Grey Knights are the most mysterious of all the Imperium’s many organisations and Grey Knight Strike Squads often form the vanguard of an assault.

This multi-part plastic kit contains ten Grey Knights with Nemesis force swords and the option to build one of them as a Justicar.There is an array of weaponry and unit upgrades including Nemesis falchions, Nemesis force halberds, a Nemesis Daemon hammer, a Nemesis warding stave, two psycannons, a psilencer and an incinerator. 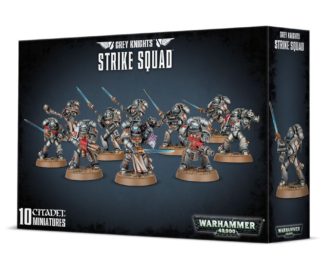