It is the middle of the nineteenth century and the age of steam is well underway. The Russian and Canadian governments, eager to capitalize on the new rail technology to bring together their vast countries, are sponsoring entrepreneurs to help build their railway networks. You are an investor, seeking to take advantage of their generous offer to make your fortune. However, your governments are not as benevolent as you first thought. They have begun to absorb fledgling rail companies, taking them away from those who worked so hard to build them by regulating impossible standards for new technology. You will have to remain diligent to ensure you are not next.

In 2005, Ian D. Wilson released 1861: Railways of the Russian Empire inspired by the railway development of Russia. In 2015, he released 1867: Railways of Canada, which is a standalone game that uses 1861’s core rules on a different map with a handful of variations to gameplay. Both are classic examples of the versatile 18xx system of train games. They are straightforward enough to be your 1st 18xx game while still offering the depth you want in your 100th game.

1861 and 1867 are perfect as weeknight games as they can usually be played by experienced players in 3 hours. The games are staples at 18xx gaming conventions often as a palate cleanser after playing a longer title. What makes 1861/1867 in particular great entry points into the 18xx system is that the two games introduce the different game mechanics in phases. The beginning of a game only has Minor Companies running relatively simple operations and as the game progresses, new mechanisms like Merger Rounds and the National Railway are introduced. They are great games to learn, have a steady but ever increasing trajectory and speed, and pack enough of a wallop to keep players returning to them time and time again.

Number of Players: 3 to 6 Players 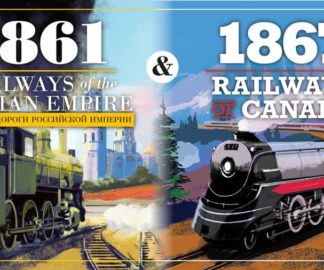